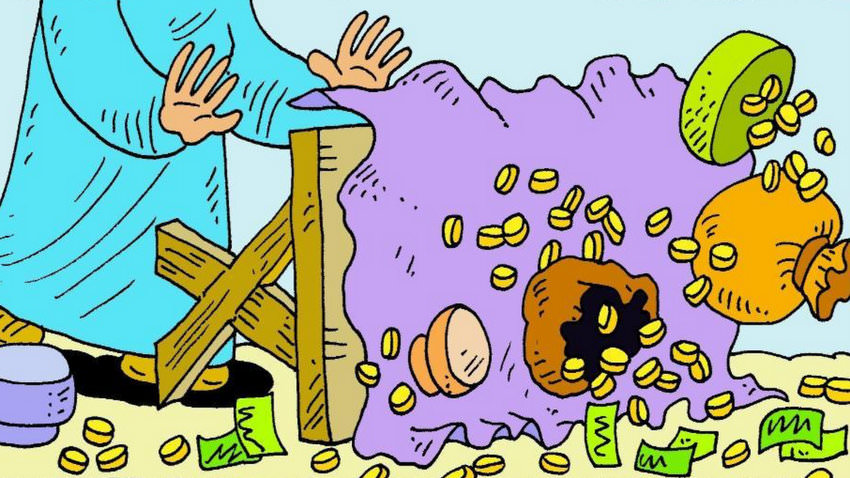 On reaching Jerusalem, Jesus entered the temple area and began driving out those who were buying and selling there. He overturned the tables of the money changers and the benches of those selling doves, and would not allow anyone to carry merchandise through the temple courts. And as he taught them, he said, "Is it not written: 'My house will be called a house of prayer for all nations' ? But you have made it 'a den of robbers.'"

The chief priests and the teachers of the law heard this and began looking for a way to kill him, for they feared him, because the whole crowd was amazed at his teaching.

This scene in the Temple happened on the Sunday afternoon after Jesus had ridden into Jerusalem on a donkey.

In the couple of weeks leading up to the Passover festival, everyone going to the Temple, to worship or offer sacrifices, had to pay a special 'Temple Tax'. You even had to pay it if you weren't a Jew, or were a woman or child (who were only allowed in the very outer part of the Temple and weren't allowed to do anything)! The only people who didn't have to pay were the Pharisees, Priests and Rabbis of the Temple!

Only special money made for use in the temple was allowed to pay the tax, so people first had to change their own coins for the Temple money. The money changers often gave very bad exchange rates and also charged you to have the money changed!! They also charged the foreign pilgrims even more as they didn't have Jewish coins to exchange! The money changers were often from the families of the Priests and Pharisees, so those families made a lot of money from people wanting to worship God. And if you didn't pay, the Priest could arrange for your household property to be taken from you. The money changers or other traders also sold the special animals to be used as sacrifices within the Temple, the animals has to be passed 'clean' or fit and healthy by the Priests and were sold at very high prices.

At the start of his teaching, about three to five years before, Jesus had been into the Temple and told the people to treat it with respect and not make money from it. He also said that the real Temple would be destroyed and would be rebuilt in three days. He was talking about himself dying and coming back to life, but the Jewish leaders and Pharisees didn't understand him.

So, when he came back into the Temple after riding into Jerusalem and found the situation worse than ever, Jesus became very angry and started to throw the cheats and traders out of the Temple. This time, when telling the people off, he used even stronger words and basically accused the Pharisees and Priests and their families of being cheats. Also Jesus calling the Temple his house (meaning he was the King) made the Pharisees and Priests very annoyed.