Betrayed - Jesus goes to the Garden of Gethsemane 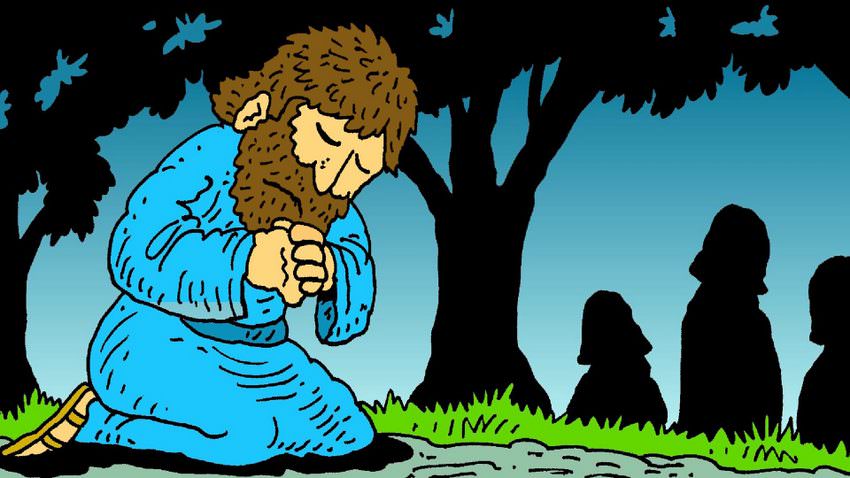 Then Jesus went with his disciples to a place called Gethsemane, and he said to them, "Sit here while I go over there and pray." He took Peter and the two sons of Zebedee along with him, and he began to be sorrowful and troubled. Then he said to them, "My soul is overwhelmed with sorrow to the point of death. Stay here and keep watch with me." Going a little farther, he fell with his face to the ground and prayed, "My Father, if it is possible, may this cup be taken from me. Yet not as I will, but as you will." Then he returned to his disciples and found them sleeping. "Could you men not keep watch with me for one hour?" he asked Peter. "Watch and pray so that you will not fall into temptation. The spirit is willing, but the body is weak."

He went away a second time and prayed, "My Father, if it is not possible for this cup to be taken away unless I drink it, may your will be done." When he came back, he again found them sleeping, because their eyes were heavy. So he left them and went away once more and prayed the third time, saying the same thing. Then he returned to the disciples and said to them, "Are you still sleeping and resting? Look, the hour is near, and the Son of Man is betrayed into the hands of sinners. Rise, let us go! Here comes my betrayer!"

While he was still speaking, Judas, one of the Twelve, arrived. With him was a large crowd armed with swords and clubs, sent from the chief priests and the elders of the people. Now the betrayer had arranged a signal with them: "The one I kiss is the man; arrest him." Going at once to Jesus, Judas said, "Greetings, Rabbi!" and kissed him. Jesus replied, "Friend, do what you came for." Then the men stepped forward, seized Jesus and arrested him. With that, one of Jesus' companions reached for his sword, drew it out and struck the servant of the high priest, cutting off his ear. "Put your sword back in its place," Jesus said to him, "for all who draw the sword will die by the sword. Do you think I cannot call on my Father, and he will at once put at my disposal more than twelve legions of angels? But how then would the Scriptures be fulfilled that say it must happen in this way?" At that time Jesus said to the crowd, "Am I leading a rebellion, that you have come out with swords and clubs to capture me? Every day I sat in the temple courts teaching, and you did not arrest me. But this has all taken place that the writings of the prophets might be fulfilled." Then all the disciples deserted him and fled.

This part of the story took place on Thursday evening and night from about 11.00pm to 12.00am.

After the Passover meal, the disciples went out of Jerusalem to a favourite resting place of theirs known as the 'Garden of Gethsemane' or 'Garden of Olives'. To get to the garden, they would have gone out through the north Temple gate, down into the Kidron valley, gone across the river, turned left, gone on a bit, turned right and there was, and still is, the garden!!!

Although it is called a garden, it is not what most western people would probably think of as being a garden. It was and is really a small summer terrace surrounded with low walls. It is only about 70 paces square and was used for growing olive trees and herb shrubs. There would have been a small house or covered room at the gate of the garden that housed an olive press that was used to make olive oil from the trees that grew in the garden. The garden probably belonged to one of Jesus' followers as there is evidence in the Bible that Jesus and his disciples often visited the garden to rest, relax and pray.

Most of the disciples probably went to the garden with Jesus (but not Judas!), although Jesus left most of them at the gate house and only took Peter, James and John with him (James' and John's dad was called Zebedee!). Jesus knew that he would soon die, and so went to pray in the garden. He left the three disciples, telling them to sit and pray for him, while he prayed in one corner of the garden.

Jesus asked God if it was possible, that he might not have to die, but that he would do what God wanted even if it meant dying. Jesus was so upset and afraid that he actually began to sweat blood. (It is a medical fact that people can sweat blood when they are under extreme pressure.) This prayer is the first time in the Bible that Jesus called God his Father. After Jesus has prayed, he went to see the three disciples, but they had fallen asleep! He told them to wake up and stay awake!

Jesus prayed again on his own and when he had finished, he again found the three asleep, but this time he did not wake them but went and prayed alone again. After Jesus had prayed for third time, he went and woke the disciples and again told them to keep watch, but this time it was because Jesus knew that Judas was coming to betray him.

Judas had left the Passover meal as soon as he legally could (After the third or 'blessing' cup of the Passover meal. This would have been about 9.00pm), he went to the Jewish leaders, to tell them where they could find Jesus to arrest him. The disciples had probably discussed during the meal that they would go to the Garden after the meal, so Judas knew the arrest could take place on that night.

When the Jewish leaders knew the arrest could take place, Caiaphas who was the High Priest, went to see the Roman Governor called Ponuis Pilate to ask for him for help in arresting Jesus.

The Jews did not like the Romans' at all, so it might seem strange that the Jewish leaders wanted the Romans help. But the Jews did not have the authority to pass the death sentence, so they needed the arrest to be a Roman one.

Also under Jewish law, the arrest, trial and death of Jesus needed to have taken place before sunset on the next day (Friday), before the Jewish holy day, the Sabbath had started. Also under Jewish law, it was completely illegal for a Jewish priest to go into a non-Jewish house or property during the Passover festival, and for a Jew to be out between sunset and sunrise. But Caiaphas was desperate, so he broke his own laws! Pilate probably wouldn't have wanted to have anything to do with the arrest of Jesus, but as it would have kept the Jewish leaders happy, he gave the Jews some soldiers from the camp next to the Temple to help arrest Jesus. Caiaphas might also have told Pilate that Jesus was planning to start a revolt against the Romans.

So with Judas leading the way, and with Caiaphas' chief steward called Malchus, following with a couple of priests, the Roman soldiers came to the Garden. They might have tried the house where the meal took place first, then finding the meal over, they went to the garden.

Judas went ahead of the group to identify Jesus. It was common for Jewish men to greet each other with a gentle hug and kiss, but Judas went a bit over the top, which is why Jesus rebuked him, especially as Judas was using the greeting to betray Jesus.

As the soldiers came to arrest Jesus, Peter took out his sword and cut off the ear of Malchus. Jesus told off Peter explaining that if he wanted he could easily get out of the situation, but he was willing to accept his fate. Jesus then healed Malchus' ear. This was his last miracle before his death, helping someone who wanted to kill him!

Jesus called the Jewish leaders cowards saying they could have arrested him any day, when he was in the Temple.