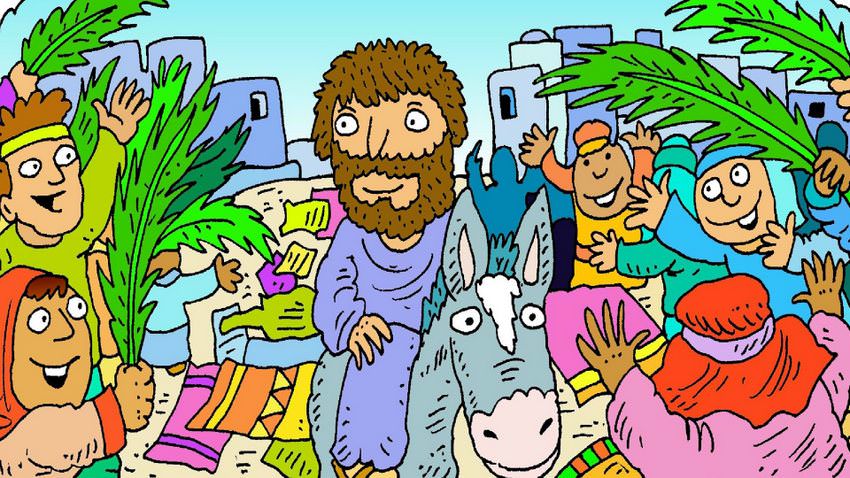 As they approached Jerusalem and came to Bethphage and Bethany at the Mount of Olives, Jesus sent two of his disciples, saying to them, “Go to the village ahead of you, and just as you enter it, you will find a colt tied there, which no one has ever ridden. Untie it and bring it here. If anyone asks you, ‘Why are you doing this?’ say, ‘The Lord needs it and will send it back here shortly.’”

They went and found a colt outside in the street, tied at a doorway. As they untied it, some people standing there asked, “What are you doing, untying that colt?” They answered as Jesus had told them to, and the people let them go. When they brought the colt to Jesus and threw their cloaks over it, he sat on it. Many people spread their cloaks on the road, while others spread branches they had cut in the fields. Those who went ahead and those who followed shouted,

“Hosanna!”
“Blessed is he who comes in the name of the Lord!”
“Blessed is the coming kingdom of our father David!”
“Hosanna in the highest heaven!”

Jesus entered Jerusalem and went into the temple courts. He looked around at everything, but since it was already late, he went out to Bethany with the Twelve.

After Jesus had said this, he went on ahead, going up to Jerusalem. As he approached Bethphage and Bethany at the hill called the Mount of Olives, he sent two of his disciples, saying to them, "Go to the village ahead of you, and as you enter it, you will find a colt tied there, which no one has ever ridden. Untie it and bring it here. If anyone asks you, 'Why are you untying it?' tell him, 'The Lord needs it.'"

Those who were sent ahead went and found it just as he had told them. As they were untying the colt, its owners asked them, "Why are you untying the colt?"
They replied, "The Lord needs it."

When he came near the place where the road goes down the Mount of Olives, the whole crowd of disciples began joyfully to praise God in loud voices for all the miracles they had seen:
"Blessed is the king who comes in the name of the Lord!"
"Peace in heaven and glory in the highest!" (they also cried 'Hosanna')

Some of the Pharisees in the crowd said to Jesus, "Teacher, rebuke your disciples!"
"I tell you," he replied, "if they keep quiet, the stones will cry out."

As he approached Jerusalem and saw the city, he wept over it and said, "If you, even you, had only known on this day what would bring you peace--but now it is hidden from your eyes. The days will come upon you when your enemies will build an embankment against you and encircle you and hem you in on every side. They will dash you to the ground, you and the children within your walls. They will not leave one stone on another, because you did not recognize the time of God's coming to you."

Jesus and his followers had been staying in or around a village called Bethany which was on the southeast outskirts of Jerusalem waiting for the Passover festival to start.

The owner of the donkey probably knew or would certainly have heard of Jesus, and so was happy to let Jesus borrow his donkey to go to Jerusalem on. It might have even been the donkey's owner that told people that Jesus was riding into Jerusalem and so the crowd formed.

The people in the crowd would have mostly been Jews waiting for a great Messiah or leader to come and rescue them from the occupation of the Romans. They would have heard about Jesus, being a great teacher and a person able to do miracles, and so would have seen him as quite a likely person to lead them to freedom.

So when they heard about Jesus coming into Jerusalem, they lined the road to greet him. Throwing cloaks and the branches of the trees, that were growing along the road, was like a red carpet being put out for someone important today, it showed respect and also helped the donkey to get a grip on the dusty road. The Palm leaf was also a sign of Israel, so waving it was like waving the Jewish national flag. The Romans would not have liked this as they were in control and had claimed Israel as part of the empire.

The words that the crowd sang and shouted in praise were taken from Psalm 118:25-26 and were chanted in the temple during important festivals like Passover. It was also a custom for the people of Jerusalem to welcome important pilgrims to the city by singing the first verse, with the pilgrims responding with the second. However, on this occasion the words were sung much more loudly and with more celebration than normal, also all the crowd joined in all the verses, so this was very unusual and important. The word 'Hosanna' means 'God Saves!' or 'Save Now!'. So the people recognised that Jesus was a very important prophet who was popular with the people and special, although they didn't think of him as the Messiah or Saviour.

The Jewish leaders and religious Pharisees didn't like what the crowd were doing as Jesus was getting far too much praise for their liking, so they asked Jesus to tell the people to stop. But Jesus replies that if they stopped, the stones on the road would start singing. This is part of an Old Testament prophesy that says that Jerusalem itself would know when the Messiah was coming into it. So I should think this made the Pharisees even more unhappy!

The place where Jesus wept was probably a bit further down the road to Jerusalem where the road goes down and round a hill, so you look over the whole of the city. Jesus cried because he could see the beauty of the city he had come to save and also that he knew this is where he would die in less than week. He then went onto prophesy about the destruction of Jerusalem, by the Romans, that happened about 50 years later.