The End? What Happened After Easter? 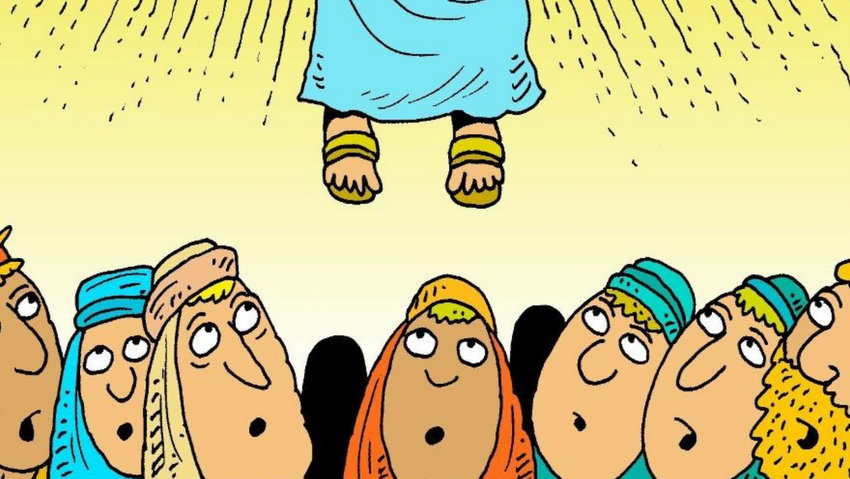 After his suffering, he (Jesus) showed himself to these men and gave many convincing proofs that he was alive. He appeared to them over a period of forty days and spoke about the kingdom of God. On one occasion, while he was eating with them, he gave them this command: "Do not leave Jerusalem, but wait for the gift my Father promised, which you have heard me speak about. For John baptized with water, but in a few days you will be baptized with the Holy Spirit."

So when they met together, they asked him, "Lord, are you at this time going to restore the kingdom to Israel?"

He said to them: "It is not for you to know the times or dates the Father has set by his own authority. But you will receive power when the Holy Spirit comes on you; and you will be my witnesses in Jerusalem, and in all Judea and Samaria, and to the ends of the earth."

After he said this, he was taken up before their very eyes, and a cloud hid him from their sight.

They were looking intently up into the sky as he was going, when suddenly two men dressed in white stood beside them. "Men of Galilee," they said, "why do you stand here looking into the sky? This same Jesus, who has been taken from you into heaven, will come back in the same way you have seen him go into heaven."

During the next 40 days, Jesus appeared several times more to his followers. About 500 people saw him in all. On the 40th day he took them out to the town of Bethany and Jesus was taken up to Heaven to live with God.

Before Jesus left the earth, he made a promise to his followers that he would send another helper, just like himself, that would be with Jesus' followers from then on, until Jesus returns to Earth at the end of time to reign forever as King. Christians believe that this special helper came to the disciples ten days later in Jerusalem. (40 + 10 = 50 = Pentecost!)

Jesus had told his followers not to leave Jerusalem as the helper would come and meet them there. So they were all sitting in a room and suddenly the Holy Spirit (sometimes called the Holy Ghost) came and went inside them. This was helper Jesus had talked about. Christians believe that everyone who truly follows Jesus, has the Holy Spirit within them and that he is the living spirit of Jesus that helps them to live a life more like Jesus. 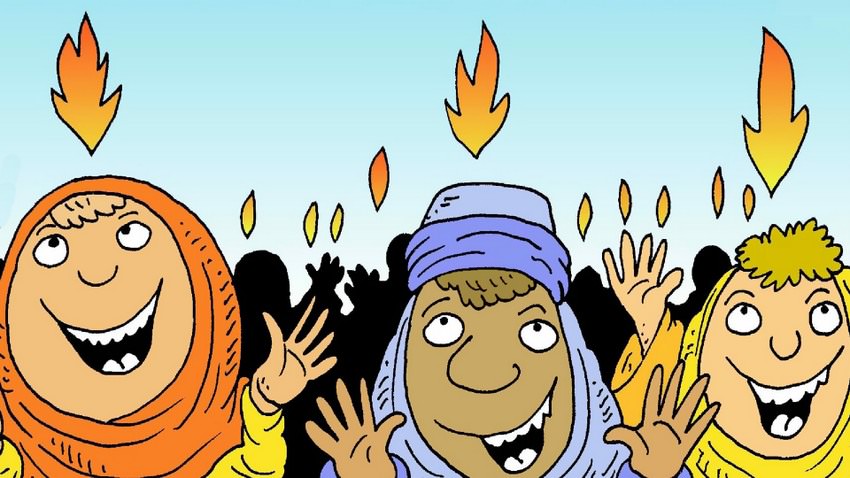 The disciples then went out into the streets of Jerusalem and for the first time, they started to tell people about Jesus. People from many different nations were still in Jerusalem and through the Holy Spirit each of them heard the disciples speak to them in their own language! Some people accused the disciples of being drunk! But then Peter came to the front and preached the first Christian sermon.

During his time with Jesus, Peter was always the last disciple to speak if important people or a crowd were around Jesus (remember, he had also betrayed Jesus after Jesus had been arrested), so for his to be the person that came and spoke to the people is amazing!

Peter told the people the story of Jesus and that he is the only way to God, explaining that Jesus and the Holy Spirit had been promised by God, through the Jewish prophet Joel, hundreds of years ago. About 3000 people became the first Christians that day.

Read the story of Pentecost (will show below)

When the day of Pentecost came, they were all together in one place. Suddenly a sound like the blowing of a violent wind came from heaven and filled the whole house where they were sitting. They saw what seemed to be tongues of fire that separated and came to rest on each of them. All f them were filled with the Holy Spirit and began to speak in other tongues as the Spirit enabled them.

Now there were staying in Jerusalem God-fearing Jews from every nation under heaven. When they heard this sound, a crowd came together in bewilderment, because each one heard them speaking in his own language. Utterly amazed, they asked: "Are not all these men who are speaking Galileans? Then how is it that each of us hears them in his own native language? Parthians, Medes and Elamites; residents of Mesopotamia, Judea and Cappadocia, Pontus and Asia, Phrygia and Pamphylia, Egypt and the parts of Libya near Cyrene; visitors from Rome (both Jews and converts to Judaism); Cretans and Arabs--we hear them declaring the wonders of God in our own tongues!" Amazed and perplexed, they asked one another, "What does this mean?" Some, however, made fun of them and said, "They have had too much wine."

Then Peter stood up with the Eleven, raised his voice and addressed the crowd: "Fellow Jews and all of you who live in Jerusalem, let me explain this to you; listen carefully to what I say. These men are not drunk, as you suppose. It's only nine in the morning! No, this is what was spoken by the prophet Joel:

"'In the last days, God says, I will pour out my Spirit on all people. Your sons and daughters will prophesy, your young men will see visions, your old men will dream dreams. Even on my servants, both men and women, I will pour out my Spirit in those days, and they will prophesy. I will show wonders in the heaven above and signs on the earth below, blood and fire and billows of smoke. The sun will be turned to darkness and the moon to blood before the coming of the great and glorious day of the Lord. And everyone who calls on the name of the Lord will be saved.' ...

... When the people heard this, they were cut to the heart and said to Peter and the other apostles, "Brothers, what shall we do?"

Peter replied, "Repent and be baptized, every one of you, in the name of Jesus Christ for the forgiveness of your sins. And you will receive the gift of the Holy Spirit. The promise is for you and your children and for all who are far off--for all whom the Lord our God will call." With many other words he warned them; and he pleaded with them, "Save yourselves from this corrupt generation." Those who accepted his message were baptized, and about three thousand were added to their number that day.

In the following years, the message about Jesus spread around the Mediterranean Sea and over the past 2000 years, across the whole world.

The Easter story is one of good news, great sadness and then joy. But it is also quite a short story. There are 27 books in the New Testament part of the Bible, but the story is only told in the four books known as 'The Gospels'. These are Matthew, Mark, Luke and John.

In Matthew, the story is told in three out of the 28 chapters (26-28). In Mark and Luke, it is also told in three chapters (Mark: 14-16 and Luke: 22-24). In John, it is told in the most detail with it being told in some of Chapter 11 and then all of Chapters 13-21. What happened to the followers of Jesus is told about in the book of Acts (including the verses from the Bible on this page) and the rest of the Bible.

To Christians, the most important thing about Easter is that Jesus willingly died to take away all of our wrong doings and bring us closer to God, that he then came back to life three days later and is still alive today in Heaven.

Another part of the Easter Story that is very important to Christians is what is known as the Last Supper (or sometimes the Lord's Supper). This became what is known as Mass (or Eucharist or Communion) and is a Christian act of worship when Christians remember the last meal that Jesus had with his followers before he died. It reminds us that Jesus died for us, to forgive our sins. It also reminds us that one day Jesus will come back to the earth to reign forever.

Nothing has ever been the same since the first Easter and you can find out more about Jesus' life in the Bible.

Christians celebrate the time when Jesus was born at Christmas.

You can also find out all about the Whys of Christmas on whyeaster.com's sister site: