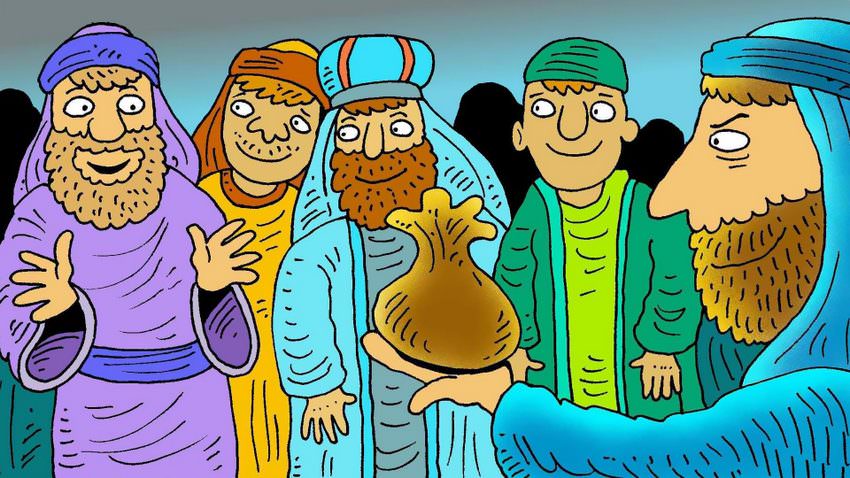 Now the Feast of Unleavened Bread, called the Passover, was approaching, and the chief priests and the teachers of the law were looking for some way to get rid of Jesus, for they were afraid of the people. Then Satan entered Judas, called Iscariot, one of the Twelve. And Judas went to the chief priests and the officers of the temple guard and discussed with them how he might betray Jesus. They were delighted and agreed to give him money. He consented, and watched for an opportunity to hand Jesus over to them when no crowd was present.

Then one of the Twelve--the one called Judas Iscariot--went to the chief priests and asked, "What are you willing to give me if I hand him over to you?" So they counted out for him thirty silver coins. From then on Judas watched for an opportunity to hand him over.

This probably took place on the Tuesday Evening in the Passover week, although some people think it might have happened during the Wednesday afternoon.

Jesus had spoken several times about someone betraying him during his ministry, although people did not understand what he was talking about.

Judas came from a town called Kerioth, so he was known as Judas Iscariot, meaning 'from Kerioth'. He was also thought highly of in the Jewish community.

Judas was probably also a member of an anti-roman freedom fighting group, so Judas had hoped that Jesus would lead a Jewish revolution to over throw the Romans and give back Israel to the Jews. But all Jesus did was to preach and heal, not to fight!

The devil entered Judas and made him go to the Jewish leaders and betray Jesus. Judas might have thought that the arrest of Jesus would have started an uprising and that he could then lead the Jews to victory, or he might have wanted more power among the Jews and saw that this was a good way of doing it, as Jesus didn't seem like he was going to start anything.

So on the Tuesday evening, after all the Temple services had finished, he went to the house of the Chief Priest, Caiaphas, to see if he could help to betray Jesus. Under Jewish law, a meeting accusing someone of a crime or arranging for an arrest could only take place in the court house, not a normal house, so the meeting was illegal! (but not the last illegal meeting as you can read on the on the Accusations page!)

The Priests and Jewish officials had already had a meeting which decided that Jesus was to be killed, so having one of the disciples coming to help them would have been very useful!

Judas would have thought that this would have made him more important, but the Jewish leaders only saw him as a common informant or 'grass'. The amount they paid him for his treachery was the amount of money needed to buy a common slave, thirty pieces of silver (this would have been about US$25 or GBP£15). What was even worse, was that the silver coins would have come from the very Temple tax that Jesus was so angry about on the afternoon of Palm Sunday!

Judas then went back and waiting for a time when he could signal the authorities to arrest Jesus. He probably hoped it would be the next day when Jesus went into the Temple in Jerusalem. (It was usual to buy the Passover Lamb on the Wednesday, ready for the sacrifice and meal on the Thursday.) It would have been Judas' job to buy the lamb in the temple, but he thought Jesus and the other disciples would have all gone to the Temple. So he must have got a big shock when Jesus decided to rest in Bethany all day on Wednesday and not go into Jerusalem until it was time for the Passover Meal on the Thursday evening!