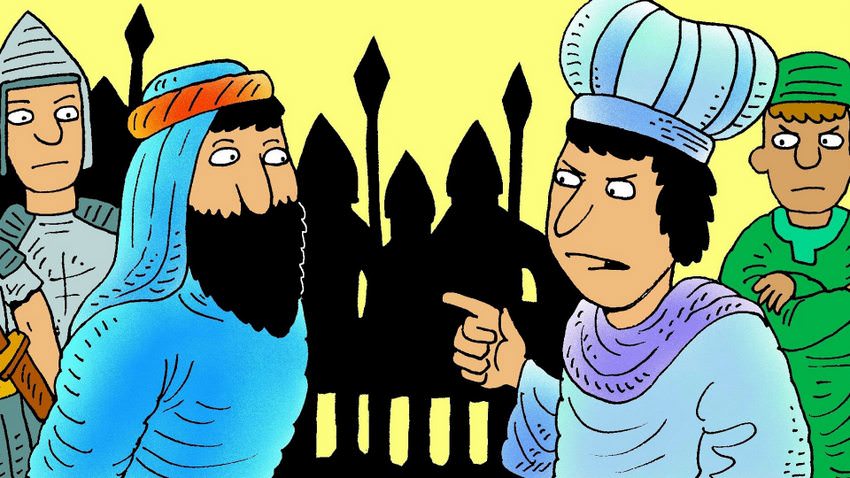 Then the detachment of soldiers with its commander and the Jewish officials arrested Jesus. They bound him and brought him first to Annas, who was the father-in-law of Caiaphas, the high priest that year. Caiaphas was the one who had advised the Jews that it would be good if one man died for the people.

Simon Peter and another disciple were following Jesus. Because this disciple was known to the high priest, he went with Jesus into the high priest's courtyard, but Peter had to wait outside at the door. The other disciple, who was known to the high priest, came back, spoke to the girl on duty there and brought Peter in. "You are not one of his disciples, are you?" the girl at the door asked Peter. He replied, "I am not." It was cold, and the servants and officials stood around a fire they had made to keep warm. Peter also was standing with them, warming himself.

Meanwhile, the high priest questioned Jesus about his disciples and his teaching. "I have spoken openly to the world," Jesus replied. "I always taught in synagogues or at the temple, where all the Jews come together. I said nothing in secret. Why question me? Ask those who heard me. Surely they know what I said."

When Jesus said this, one of the officials nearby struck him in the face. "Is this the way you answer the high priest?" he demanded. "If I said something wrong," Jesus replied, "testify as to what is wrong. But if I spoke the truth, why did you strike me?" Then Annas sent him, still bound, to Caiaphas the high priest.

As Simon Peter stood warming himself, he was asked, "You are not one of his disciples, are you?" He denied it, saying, "I am not."

The chief priests and the whole Sanhedrin were looking for evidence against Jesus so that they could put him to death, but they did not find any.

Many testified falsely against him, but their statements did not agree. Then some stood up and gave this false testimony against him: "We heard him say, 'I will destroy this man-made temple and in three days will build another, not made by man.'" Yet even then their testimony did not agree.

Then the high priest stood up before them and asked Jesus, "Are you not going to answer? What is this testimony that these men are bringing against you?" But Jesus remained silent and gave no answer. Again the high priest asked him, "Are you the Christ, the Son of the Blessed One?" "I am," said Jesus. "And you will see the Son of Man sitting at the right hand of the Mighty One and coming on the clouds of heaven."

The high priest tore his clothes. "Why do we need any more witnesses?" he asked. "You have heard the blasphemy. What do you think?" They all condemned him as worthy of death. Then some began to spit at him; they blindfolded him, struck him with their fists, and said, "Prophesy!" And the guards took him and beat him.

About an hour later another asserted, "Certainly this fellow was with him, for he is a Galilean." Peter replied, "Man, I don't know what you're talking about!" Just as he was speaking, the rooster crowed. The Lord turned and looked straight at Peter.

Then Peter remembered the word the Lord had spoken to him: "Before the rooster crows today, you will disown me three times." And he went outside and wept bitterly.

This part of the story took place late on Thursday night / early Friday Morning from about 12.00am to 6.00am.

After Jesus had been arrested in the Garden, he was led away by the Jewish leaders and Roman soldiers for the first of several trials, most of which were actually illegal in the way that they were conducted.

Peter and John had followed the party that had arrested Jesus to the house of Annas, and then after Annas had briefly questioned Jesus (illegal under Jewish law!), they followed them on to the house of Caiaphas. The Romans soldiers would not have gone into either house, and after they had taken Jesus to Caiaphas, they would have gone back to the their barracks next to the Temple.

Jesus would have arrived at the house of Caiaphas between 2.00am and 3.00am. John probably went into the house with Jesus, as he was known by the Jewish leaders. So Peter was left alone in the courtyard outside the house with the servants of Caiaphas. He was afraid of what might happen to him (remember he'd cut the ear off one of Caiaphas' most important servants earlier that night!). As it was night, it would have been quite cold and he would have felt safer in a group, so Peter went to warm himself with the servants around a small fire or brazier.

Peter was first accused of knowing Jesus and also of being friends with a criminal. He denied that he knew Jesus. A bit later, while he was still warming himself, someone else said that Peter knew Jesus. For the second time, he denied this and moved away from the group.

He would have stayed on his own and kept quiet while the trial and questioning of Jesus took place inside the house. This would have lasted about two to three hours.

Whilst this was happening outside, Jesus was being questioned by Caiaphas in the house. The questioning / trying of Jesus by Annas and then Caiaphas was illegal under Jewish law on six points:

In this illegal questioning, Caiaphas was trying to get Jesus to incriminate himself and his disciples. But Jesus refused to fall for the trap and said that he was in the temple courts every day, so why didn't they arrest him then if what he was doing was wrong! The guard hitting Jesus on the cheek was trying to insult Jesus. Hitting someone on the cheek was only done to someone who had committed a very minor offense. Criminals being charged with a serious crime were whipped on the back.

Although at this point it says that in John 18:24 "Then Annas sent him, still bound, to Caiaphas the high priest.", Jesus was not at the house of Annas, but at the house of Caiaphas. This verse really means that Annas had 'officially' sent Jesus for trial at the full Jewish court.

After the first 'trial' by Caiaphas was over, a call went out for the Jewish council to assemble, it would have been about 4.30am - 5.00am. The house servants would have been sent out at daybreak to wake up and assemble the council members for the trial. However, not all the members were called to the trial.

After the Jewish council members had gathered, the only vaguely lawful Jewish trial of Jesus took place.

A proper trial had to have ALL members present and remember it was illegal to question or try a Jew during a feast or festival such as Passover! However, two notable council members weren't present at the trial. These were Joseph of Arimathea (a secret friend of Jesus and his followers, you will hear more about Joseph later in the story!) and Nicodeamas (a member who had spoken to Jesus previously in the Temple and was sympathetic to his views). These two council members were probably not woken up and called to the meeting as Caiaphas knew they would not have agreed with what was happening.

Jesus was made to stand trial for the crime of blasphemy. Crimes such as these, that were punishable by death, were supposed to have a long and complicated system of witnesses. In this case this was not done and no good Jewish judge would have allowed this, however prejudiced he might have been, so Annas and Caiaphas had the trial without a judge!

Trials also had to have two independent witnesses to make the accusations. At this trial the council did have more than two witnesses, but they were all friends of the council members who had been talked into testify against Jesus, and so couldn't even agree on a story of what Jesus had done wrong!

As a Jew, Jesus would have known that the whole trial was illegal and so kept quiet, as he also knew that the High Priests and Pharisees would try to twist anything he said against him.

The accusation of Jesus saying he would rebuild the temple was probably made by a Priest or high ranking temple official who had heard Jesus preaching in the temple when this had happened:

Then the Jews demanded of him, "What miraculous sign can you show us to prove your authority to do all this?" Jesus answered them, "Destroy this temple, and I will raise it again in three days."
John 2:18-19

What Jesus had meant was that he would be killed and be raised to life again three days later, and that he would be the new temple and the only way of coming to God, and that the old temple would not be needed for this purpose anymore. But the Jewish leaders did not understand this!

They tried to convict Jesus on these points, as they could argue that he was a dangerous leader that might lead the people into destroying the temple, and that in saying he could rebuild the temple, that he had magical powers like God. But these crimes still couldn't bring the death sentence on a prisoner, only a long time in jail, so Caiaphas had to ask Jesus directly if he claimed to be the Son of God. In asking Jesus if was the 'Christ' (the prophesied Jewish Messiah or Saviour) and the Son of God, Caiaphas would have been forcing Jesus into an answer. This was an offical 'charge' that had to be answered by a prisoner.

At this point Jesus was forced to reply and answered that he was; and that he would sit next to God and rule over the earth. This was completely blasphemous to the Jewish leaders and just what they wanted to hear! They could now 'convict' Jesus on a crime punishable by death. A person tearing their clothes is a sign of great emotion, usually grief, among Jews. It should have been a Jewish judge or the president of the trial that pronounced the sentence, but as there wasn't one at the trial, Caiaphas, with the other council members, sentenced Jesus.

Jewish trials (even ones preceded over by judges!) could not 'officially' pass the death sentence, only the Roman authorities could do this. So the Jewish leaders next planned to go and see the Roman authorities. (You can learn more about this in the next section of the story.)

Jesus was then beaten and mocked by the Jewish guards. This also was completely illegal as Jewish law stated that no man condemned to death could be beaten or whipped until the process of being put to death had been properly started.

Whilst all this was taking place, the courtyard would have become more lively with all the servants now being awake and talking about what was happening in the house.

Peter was again accused of knowing Jesus. The man would have known that Peter came from the northern province of Galilee because of his accent. This was a very different accent and even dialect to that spoken by people from Jerusalem. (The man was also probably the servant who's ear Peter had cut off during the arrest of Jesus the previous evening!) Peter denied knowing Jesus for the third time and then the rooster crowed as Jesus had predicted.

Peter could well have turned and seen Jesus looking at him from a window of the court house.

After the rooster had crowed. Peter ran off and cried because he was ashamed of what he had done, denying Jesus.