Maundy Thursday is the Thursday of Holy Week. It represents the day that the Jewish Passover was celebrated in the Bible Story of Easter. 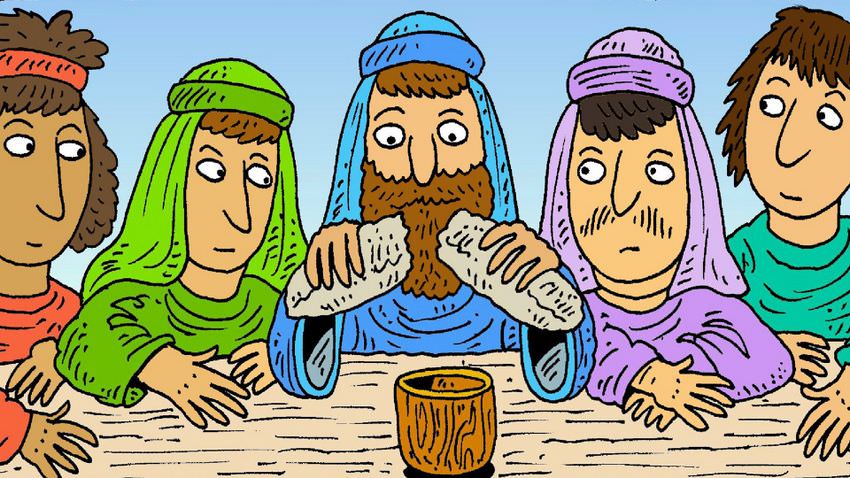 On that day, Jesus had his last meal with his friends and followers before he was killed. This meal is now know as 'The Last Supper'. At the meal, Jesus and his friends would have followed the Jewish Passover custom of eating roast lamb and unleavened bread (matzah) and drinking red wine. However, Jesus gave the bread and wine a special meaning. When they got to the part of meal when the Bread was eaten and the wine drunk, Jesus said that these would be a symbol of his body and blood to his followers to help them remember that through his death, our sins are forgiven.

Maundy comes from Latin and is the word for 'Command'. At the meal that Jesus had with this followers, he told them: "A new command I give you: Love one another. As I have loved you, so you must love one another." John 13:34.

Also at the same meal, Jesus told/commanded his followers to think of him when they ate bread and drank wine. This is very important to Christians and is now remembered in the Christian service known as Communion, Mass or Eucharist.

Jesus washed his disciples feet before the meal to show that is important to be helpful and serve others. People in Jesus time wore open sandals and the streets were very dirty, so washing peoples feet was normally done, as you entered the house, by the lowest servant who got the worst jobs!

After the meal, Jesus and some of his friends went to a nearby garden called Gethsemene to pray. Later in the evening he was betrayed by one of His disciples called Judas. Jesus was arrested and taken to trial.

You can read more about the story of The Last Supper and Jesus being arrested in the Story Section.

In some countries, priests wash the feet of Church go-ers to the Maundy Thursday services to remember what Jesus had done. In the U.K. the Queen gives out special coins called Maundy Money instead of washing people feet! This is a tradition that goes back to Medieval times.

In some Catholics countries, ladies wear black on Maundy Thursday as a sign of mourning for Jesus to remember he died on Good Friday.