Easter is the time of the Christian year when Christians remember the Death and Resurrection of Jesus Christ. They believe that Jesus, who they believe was the son of God, died for everyone's wrong-doings and then came back to life three days later to defeat death and evil: so if you believe in Him you will live forever in Heaven.

The Name of Easter

No one is 100% sure where we get the English word 'Easter' from! In pretty much every other European language, the word for the festival of Easter comes from a variation on the word 'Passover' (Pesach - פֶּסַח in Hebrew or Πάσχα in Greek).

One theory is that the word Easter comes from the Anglo Saxon month 'Eostremonath' which was about the time of year we now call April, when the Christian festival was held. The month might have been named after a German goddess 'Eostre' But the only reference to this name is from the early historian Bede in around 730 AD. And we're not 100% sure he was accurate! But having the festival named after the month it took place in seems to make sense. Sometimes 'Eostre' is associated with another goddess called 'Ostara' - the goddess of the dawn. However, that name although that name was first connected to Eostre by Jacob Grimm (of Grimm's fairytales) in 1835. The word Ostara is in German manuscripts from the middle ages, but it's always for the name of Easter, NEVER the name of a goddess!

Another theory (and the most likely) is that the term 'Ostern' (linked to 'Ostara') actually came from an early Latin term for Easter week 'hebdomada alba' (which means 'white week'). In Latin 'alba' means 'dawn' as well as 'white'. When the term was translated from Latin to Old High German, a mistake was made by using the plural term for dawn (ostarun), rather than white. So Easter became known as 'Ostern' in German and then 'Easter' in English.

You might also see some sources saying that it's named after an Akkadian/Babylonian goddess called 'Ishtar' or 'Astarte'. But this theory has been widely proven to be completely wrong! Ishtar was a goddess in the very ancient religions of the middle east - about 5000 years ago. She stopped being worshipped at least 1500 years before Jesus was born. So apart from having a name which sounds a bit like Easter, she has nothing to do with the Jewish Passover festival or the Christian festival of Easter which came after it! Her name seems to have been first connected with Easter in 1853 when a church minister, who had some very strange views about lots of things, wrote a pamphlet which had no serious historical merit at all.

The Dating of Easter

The Passover festival dates from about 4,000 years ago when Jewish people remember that God saved them from slavery in Egypt. Jesus was a Jew and so celebrated the Passover. Passover takes place in the first month of the Jewish New Year (14-15 of the month of Nisan). The Jewish calendar follows the cycle of the moon, so the date changes a bit every year.

The first Jewish Christians added Easter celebrations to the Passover festival and because Jesus rose from the dead on a Sunday, so Easter Day became the first Sunday after Passover.

Unlike Christmas, when Jesus's birth is celebrated (although we don't know what time of year Jesus was born!), Easter is celebrated around the same time of year that he was killed. This is because Jesus died at the time of the Jewish Passover festival. 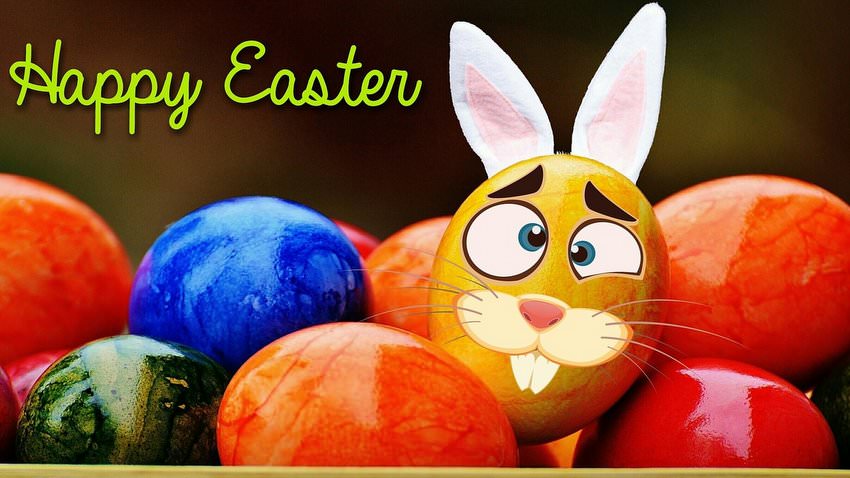 Over the years, the Christian festival moved in date slightly from the Jewish Passover, so they don't now have the same date, but sometimes they are very close! The Christian date for Easter also follows the moon, so it also changes every year. To make things even more complicated, Orthodox Christians celebrate Easter, like Christmas, on a different day to Catholic and Western Christians! Find out how to work out the date of Easter Sunday...

For Christians, the full Easter period lasts for a long time. Easter officially starts with Lent on Ash Wednesday, 46 days before Easter Day. (Lent lasts for 40 days but you don't count the Sundays!) Then 39 days after Easter Day, Christians celebrate Ascension Day, when they remember Jesus going back into Heaven and promising to come back to earth one day. Easter officially ends 49 days after Easter Day with the Christian Festival of Pentecost or Whitsun, when Christians remember that God sent his Holy Spirit to help Christians. So Easter is a very busy time for Christians!