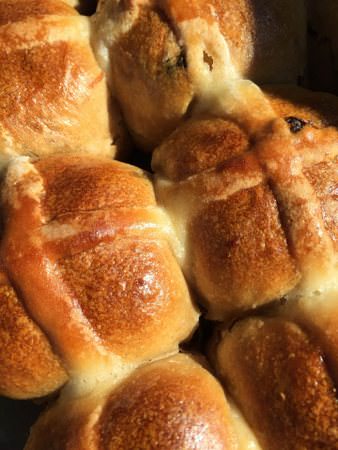 There are some special foods eaten at Easter time, one of the most famous are Hot Cross Buns. These are often eaten in the U.K. on Good Friday. These are yeast dough buns with currants and raisins in them. They seem to have been created in the 1700s in England. There's a story that they were invented in the town of St Albans where they were given to pilgrims at Easter time. However, this claims seems to come from an advertisement by a baker in London in 1851 as a way of selling his buns - there's no other history behind it!

Another food eaten in the U.K. at Easter time is Simnel Cake. This is a rich fruit cake covered with a layer of Marzipan. There are 11 marzipan balls put around the top of the cake that represent the 11 faithful disciples of Jesus. The cake is also has a layer of Marzipan in the middle of it! It is traditionally eaten on Mothering Sunday in the U.K. which is always on the middle Sunday of Lent. Simnel Cakes were first made by servant girls and maids to take home to their mothers on Mothering Sunday.

Pancakes are eaten on Shrove Tuesday, traditionally to use up all the fatty foods before Lent. In Denmark they eat 'Shrovetide Buns'.

A traditional Greek Easter cake is made with Oranges and Almonds in it. It is eaten with a spicy orange sauce poured over it. In Greece, Easter breakfast might even be lamb soup!

In Ethiopia Easter breakfast, to celebrate the end of Lent, is often 'dabo' sour-dough bread. It is traditional that the bread is cut by a priest or by the head man in the family. The main Easter meal is eaten in the afternoon. The meal normally consists of a sour dough pancake called 'injera' and it is eaten with a mutton or lamb stew called 'beg wot'.

And, of course, there are Easter Eggs!!!