Eggs & Chicks (which come from eggs!) are now often the main thing that people think of if you say Easter. Having eggs to eat, especially at Easter, seems to come from the middle ages in Europe. During Lent, in the 40 days before Easter, most people took part in a fast and didn't eat certain foods, including dairy items like milk and eggs. So after eating no eggs for several weeks, they would have been a real treat to eat at Easter when the fast was over!

In Europe, coloured eggs have been used to celebrate Easter as house decorations since the 13th century. In Eastern European countries, such as Hungary and Romania, wooden eggs are beautifully painted in lots of different patterns. The patterns often have special names and meanings and help to tell the Easter Story.

In Russia, during the early years of the 20th century, the former Royal rulers Czar Alexander III and Czar Nicholas II had some very special Easter Eggs made for them by the jeweller Carl Fabergé. 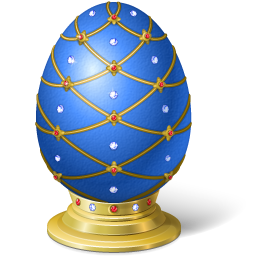 The first egg was a gift from Alexander III to his wife, was made of gold and white enamel. Inside the egg was a golden yolk containing a golden hen with ruby eyes. Inside the hen was a tiny golden crown. It was so beautiful that the Czar (meaning King) said that every Easter, Fabergé should make the Czarina (or Queen) a special egg. The design of the egg was left up to Fabergé, but each egg had to have a surprise in it. One amazing egg celebrated the opening of the Trans-Siberian railway. It was made of solid silver, with a map of the train route on it. The stations were marked with precious Jewels, and inside was a gold clockwork train! Fabergé made eggs for other members of the Russian royal family, and occasionally for the Czar to present to other monarchs. They are very precious, and are kept in royal collections and museums.

In some countries, egg hunts take place over Easter. Eggs are hidden around a house or garden and children have to find them. Sometimes they are told that the eggs were hidden by the Easter Hare or Bunny.

Egg rolling races are held all over the world on Easter Monday. Eggs are rolled down a hill or slope and the first one to reach the bottom that hasn't broken is the winner. There is also an egg-knocking game is played in lots of countries including France, Germany, Norway and Syria. The game is played with hard boiled ones and is a bit like the game of 'conkers'. The object of the game is to hit everyone else's egg and to keep your own one unbroken. The last player with a whole egg is declared the winner.

Chocolate Eggs have replaced wooden ones now and are certainly a lot nicer to eat!

If you know of any others, please let me know!

Please only try this with some adult supervision!!